Reading the article will take you: 3 minutes.
Speedometers, or gauges, are very intuitive hence their popularity in dashboarding. But they evoke mixed feelings among analysts.

This is another post in which we will deal with dashboards and various forms of visualization that can be used in a dashboard. In previous articles we discussed bullet graphs and thermometers. Now it is time for a visualization which is generally more associated with dashboards. However, they evoke mixed feelings among analysts.

The idea behind the speedometer, or gauge, , is simple: to show the value of a selected key indicator in the same way a car's speedometer shows the speed of travel. Attractive and simple, everyone is able to read the data presented in this way. But let's pause for thought for a moment: The task of the dashboard is to transform the stored data into information. It is also intended to facilitate quick decision making.

In a car, the speedometer allows speed to be monitored and the driver's action adjusted to road traffic regulations. In the case of a dashboard, the "engine" we are monitoring with the gauge visualization is the data. Sounds interesting, but is this analogy true? What are the drawbacks of such an approach?

The most serious criticism of this type of visualization is that it only captures the state for a specific moment in time (snapshot), or for a specific single category (e.g. one region, one department, etc.). Unlike bullet graphs or thermometers, it is not possible to show in a single gauge changes over time, or compare districts, and so-on. Due to this missing context we may lose the point of reference. It is difficult therefore, to state firmly that the gauge visualization supports the main purpose of a dashboard, namely facilitating quick decision making. By their nature, gauges give the value of the indicator in isolation from its history, which can lead to hasty or even misleading conclusions. Of course, we may present multiple gauges on the same dashboard, the danger being it will lead to too much clutter. Other criticisms levelled at gauges are mainly related to aesthetics, which, in the case of dashboards and the limited space at our disposal, is not a trivial issue. Gauges take up a lot of space. If we add the fact that they do not really convey that much information - the state of one indicator (in relation to one point in time, norm, etc.), their frequent appearance in dashboards is questionable.

Does this mean that we should give up the use of speedometers on dashboards? Not entirely.  We should just use them consciously, being aware of their advantages and disadvantages. As with all visual presentations of data, their selection must be preceded by a careful reflection about what, why and how we want to show and what consequences it will have in terms of perception.

When is the use of the gauge appropriate? When the snapshot (point in time) shown does not deprive the recipient of the possible interpretation. Also, when the gauge shows the value of the key indicator for the whole dashboard and it doesn't matter that it takes up a lot of space and attracts attention.

Let's take a look at the visualization below. We can make it with PS IMAGO PRO (open Predictive Solutions menu and choose Dashboard > Percetage of Target > Gauge) We again return to the subject of smog using data and assumptions from a previous post on bullet graphs. 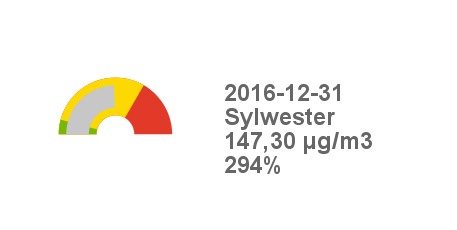 The gauge shows the state of PM10 suspended particulate matter in Kraków, as measured at the station at ul. Bujaka on New Year's Eve. In the background, the following standards are marked with colors, compatible with traffic lights: green (permissible), amber (elevated), and red (alarm). The use of traffic lights, or RAG charts (Red - Amber - Green), to mark thresholds is an additional advantage of the visualization. The grey slider has stopped in the yellow area, meaning "watch out" - the content of PM10 particulate matter has reached an elevated level. This is confirmed by the additional description on the right-hand side, where the dust quantity and the percentage above threshold levels  are shown. The use of the gauge in this situation does not raise any objections: We are monitoring the state of the air on a given date, and yesterday's value is not crucial. Moreover, the gauge refers to specific air quality standards and it is these standards that allow us to interpret the value of the indicator.