Reading the article will take you: 5 minutes.
In this article you can find perceptual maps prepared using different normalization methods.

Since perceptual maps are particularly useful in marketing analyses, we shall use the example of a chocolate manufacturer who plans a marketing campaign promoting its products. The aim of the analysis is to adjust marketing messages that highlight particular chocolate varieties for specific consumer segments, and to decide on the optimal timing of the TV ad.

If we use the traditional approach, we may start the analysis by creating a crosstab, such as the one presented below. The rows of the table contain a variable dividing consumers into age-based segments. The variable visible in the column is the favorite chocolate variety indicated by respondents.

The forte of correspondence analysis is the possibility to see relations between row and column data points in a perceptual map;  this is, usually, its primary purpose. A chart that displays data points representing both rows and columns is referred to as the biplot.

In our example, the biplot may help us answer the following question: which chocolate varieties are preferred by a given consumer group? For instance, we know that we want to film a TV ad directed to persons under 20, but which chocolate varieties should be highlighted in the ad? In order to answer that question, it is best to prepare a perceptual map in which the data points representing chocolate have principal coordinates, and the data points representing age groups have standard coordinates [1]. Assuming that the variable containing information on chocolate variety is a column variable, we should choose column normalization resulting in the map shown in Figure 1 below. 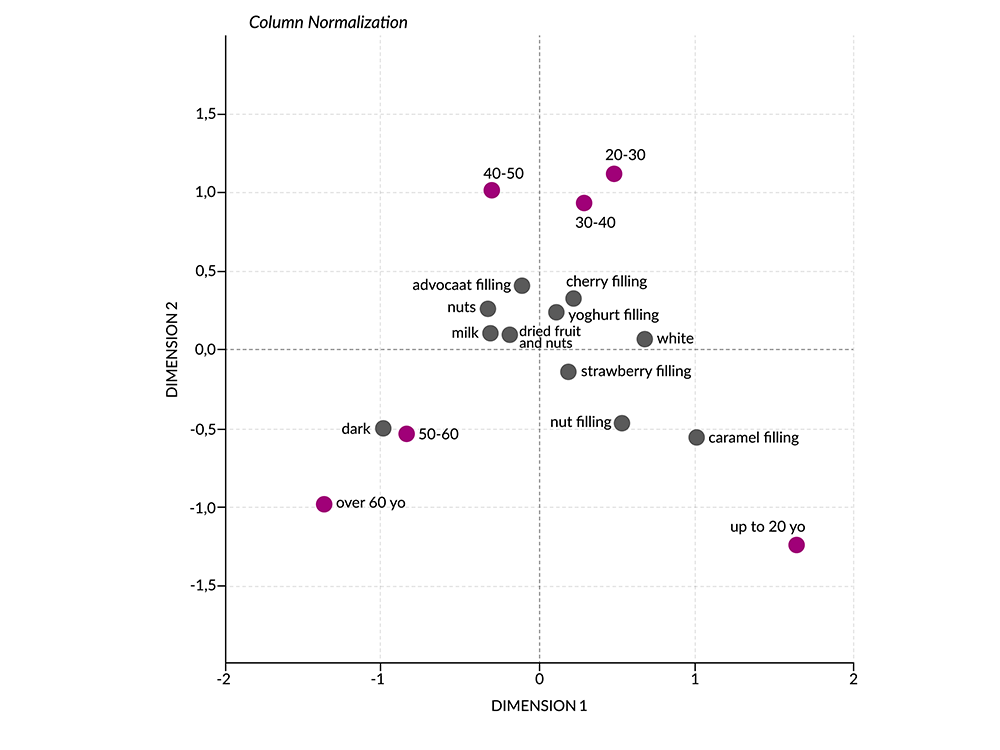 Asymmetrical perceptual maps are created using either row or column normalization. In such maps the data points with principal coordinates tend to group closer to the center than the data points with standard coordinates. How do we interpret such a map? Firstly, we can interpret intervals between points with principal coordinates, i.e., look for characteristic groups among different varieties of chocolate. We cannot, however, interpret intervals between categories with standard coordinates, as intervals between them do not necessarily reflect the chi-square distances. More importantly, we cannot interpret the distance between a column data point and a row data point: this distance, with column normalization, expresses the degree of domination of a given column in the profile of a given row. In the above map we can easily interpret that among the youngest respondents, the most popular was chocolate with a caramel filling, and the second most popular – chocolate with a nut filling. In the ‘more than 60 yo’ age group, dark chocolate was the favorite variety. We shall proceed accordingly when reading varieties popular in other age groups.

Let us now reflect on what would happen if we presented the same data in a perceptual map with row normalization. The result of such an analysis is presented in Figure2 below. 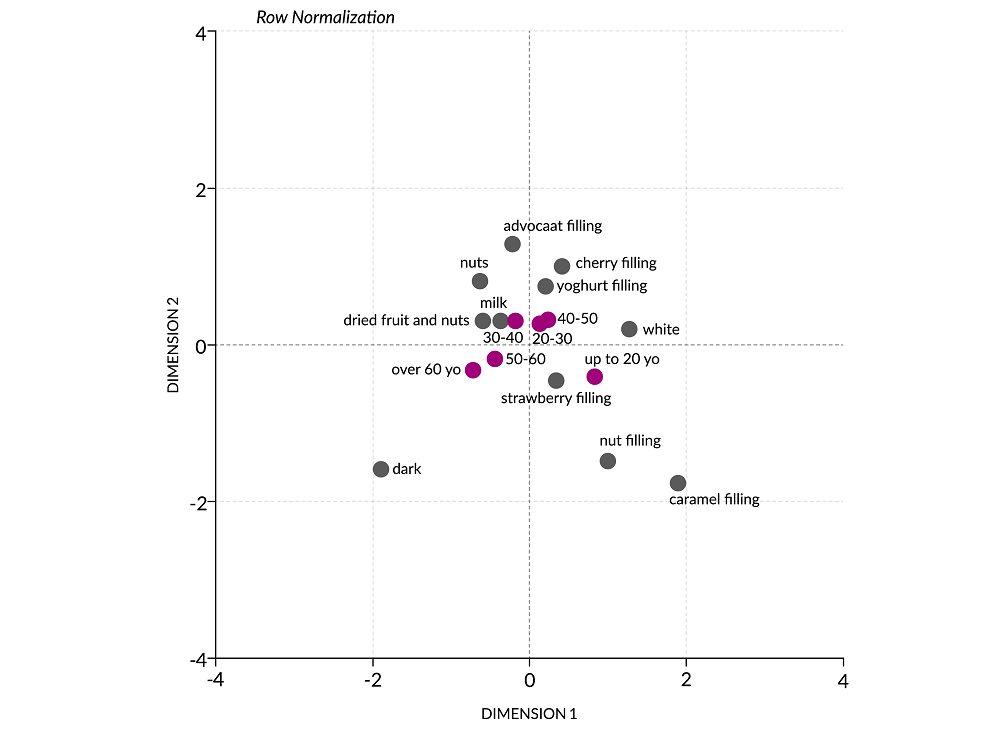 Figure 2. Perceptual map with row normalization: Used to determine which age groups are interested in a specific chocolate variety.

As you might have guessed, now it is the row data points that group closer to the center of the map, whereas the column data points are more scattered. Also, the map will now read differently, and would be particularly useful if we wanted to know which age groups are interested in specific chocolate varieties. The difference may not be clear at first, therefore we shall use an example to illustrate it.

Let us say that chocolate with an advocaat filling has recently been introduced to the market. The manufacturer would like to know which age groups prefer this particular variety of chocolate, so our starting point is ‘chocolate variety’, not ‘age group’, as it was before. From the map in Figure 2 with row normalization we may read that the advocaat variety is preferred mostly by middle-aged consumer groups (30-40, 40-50, 20-30). As we can see, the choice between column and row normalization depends on the research question we have posed, and selection of the appropriate normalization method helps to answer such a question precisely.

Unfortunately, although the visualization methods presented above have many advantages, they also have a few drawbacks: When data points are tightly grouped around the center of the coordinate system, they may become illegible;  when included in a report, not every report reader will be able to correctly read and interpret the data points. Therefore, another type of normalization is often used: symmetrical normalization [2]. The choice of this type of normalization is often taken in an attempt to improve the layout and legibility of the map. It is possible thanks to the fact that in symmetrical normalization, row and column points are distributed evenly across the map. 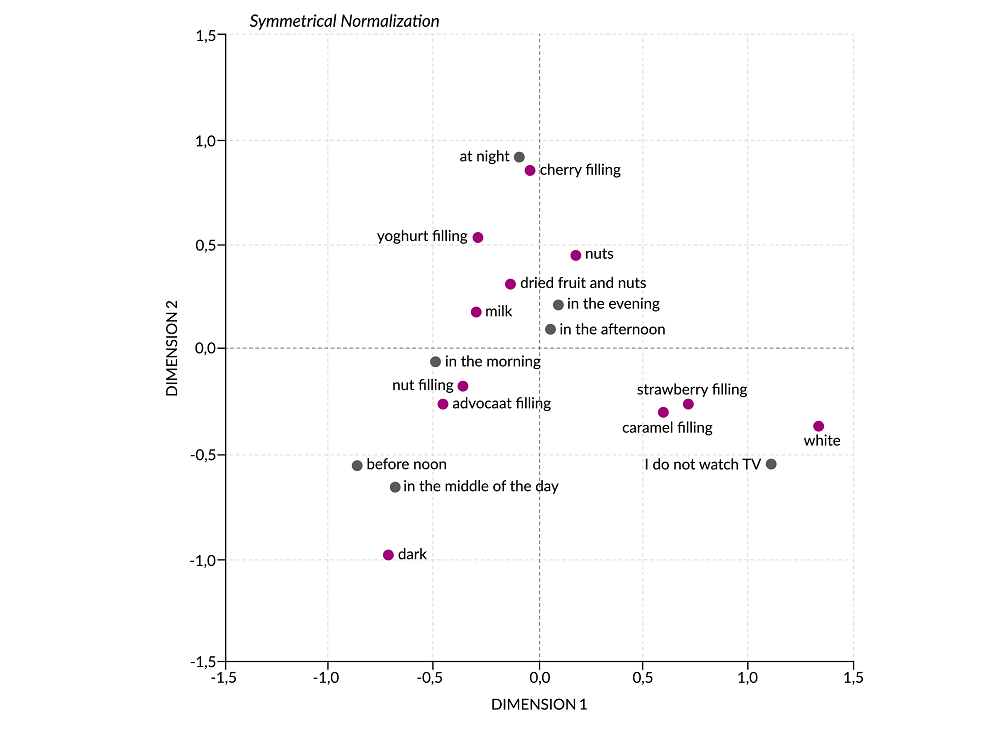 Although it cannot be denied that this kind of perceptual map is more convenient, strictly speaking, symmetrical normalization is not as precise as the row or column normalization methods: its interpretation is less clear, and it may mislead the analyst in some cases. There is no doubt, however, that despite these drawbacks, it is the most common normalization method used in practice. It is chosen particularly when an analyst wants to present the relationship between two variables without hypothesizing about dependencies between them.

Let us assume that the chocolate manufacturer is preparing ads that will be broadcast on TV. It is important they make good decisions not only about the content of the ad but also about the timing of the ad according to specific chocolate varieties. To this end, consumers were asked in the survey about chocolate preferences also about their TV viewing habits. The perceptual map with symmetrical normalization shown in Figure 4 below combines this information to help determine which chocolate varieties should be presented at specific times of day. 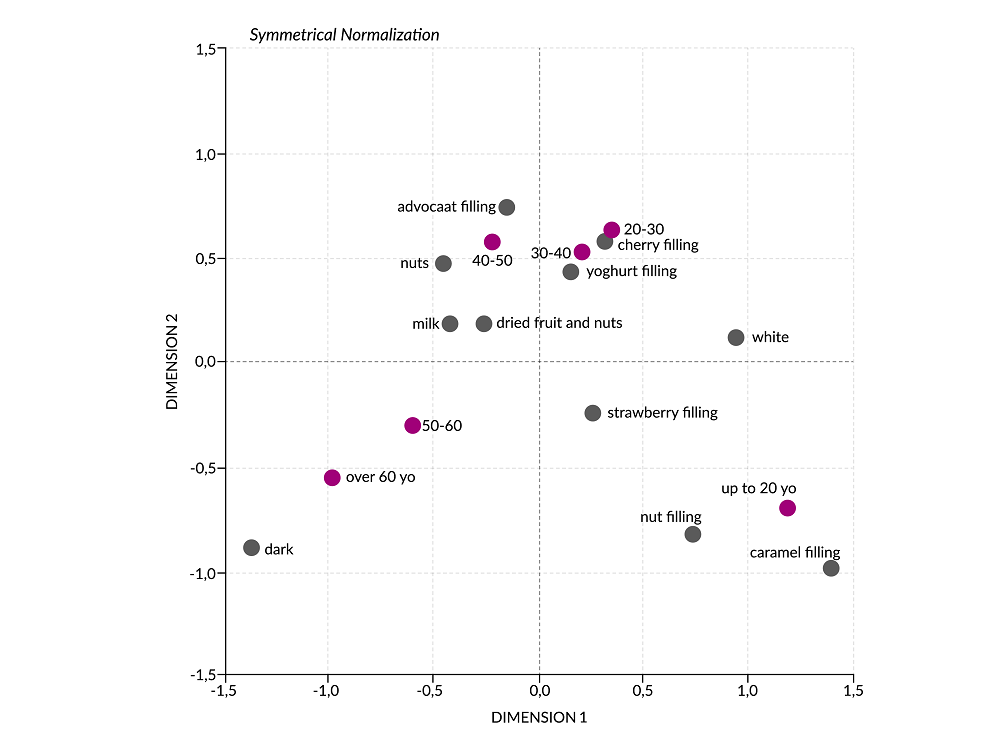 It is evident that caramel, strawberry, and white chocolate ads should not be shown on TV, as persons interested in this variety appear to watch no television at all:  To promote these chocolate varieties, the company may went to consider other media. Dark chocolate should be advertised in the morning and early afternoon; cherry flavor should be promoted mostly at night.

[1] Coordinate types are described in the article “From crosstab to correspondence analysis: how exactly are the rows and columns of a crosstab transformed into data points in a chart?”.

[2] Names of normalization methods may differ from one statistical package to another. The normalization method referred to in this section is the one in which both column and row standard coordinates are multiplied by square root of the singular value.