Reading the article will take you: 3 minutes.
In today's post we will combine the classic (and timeless) with the modern (but not worse).

Do you know the bar chart? The answer is probably yes. And how can we develop it? There is no single correct answer to this question.  As ever, it depends on what we want to achieve. One of the paths (for the compiled bar chart) discussed in a previous post was the Marimekko chart. Today it's time for another type of visualization: a derivative of a bar chart - the bullet graph.

Let's start from the beginning. The author of the classic bar chart in the form we know it to this day was already mentioned on the pages of this blog: William Playfair, who posted it in his work "Commercial and Political Atlas" in 1786. 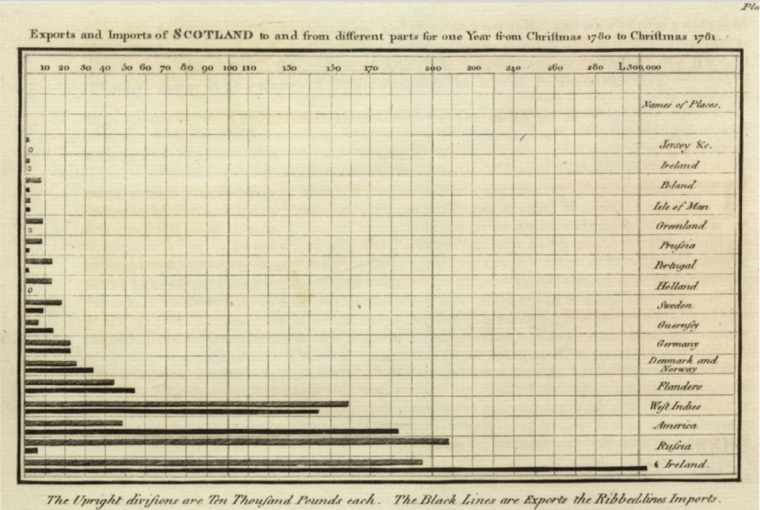 If we believe the stories, he was inspired by Joseph Priestley's work from 1765 and.... lack of data. Joseph Priestley, about 20 years earlier, used the bars on a graph of the lifespan of Greek philosophers (the bars stretched between the year of birth and death). Playfair wanted to prepare a similar chart with information about trading in Scotland. Unfortunately (although for descendants perhaps also "fortunately"), he had data for only one year - hence the resignation from the timeline.

But what if we are faced with not a lack of information, but an excess of information that needs to be presented in a limited space? This question, in the context of a bar chart, was also asked by Stephan Few. As a solution, he proposed a dashboard in the form of a bullet graph.

What is a dashboard? It can be defined as a visual presentation of the most important information needed to achieve a set goal(s). Characteristically, it is placed on a single screen, allowing you to monitor information at a glance.[1]

What is a bullet graph?

It consists of 5 basic components:

So much for theory. What can we use such a chart for? To compare sales in time, to show the change, the percentage of plan implementation, etc.

Since winter is almost upon us, the heating season has already started, and I am writing from a beautiful, however smoke-covered Krakow, let us see how the graph bullet works in air quality monitoring, more precisely the concentration of pm10 dust in the air. We have data showing the average 24-hour pm10 concentration measured at one of the measurement stations in Kraków (Bujaka Street) during the Christmas and New Year's Eve period in 2016.[3]

Pm10 is a mixture of particles (including toxic particles) with a diameter of less than 10 micrometers, mainly benzenes and heavy metals. In Poland, the standards for pm10 dust are
set at 3 levels:

Let's go back to the data. You can show them on a normal bar chart as below.

Each bar represents the average value of a 24-hour measurement on one day. Values are shown in µg/m3. Definitely the highest concentrations, significantly different from other concentrations, are those from 31 December and 30 December (fireworks perhaps?). Well, so what? Do these values exceed the permissible standards? At what level? We will not get this information from this chart.

Let's keep trying. We can create a variable, in percentage, showing the ratio of concentration to the selected standard (in this case the acceptable level): 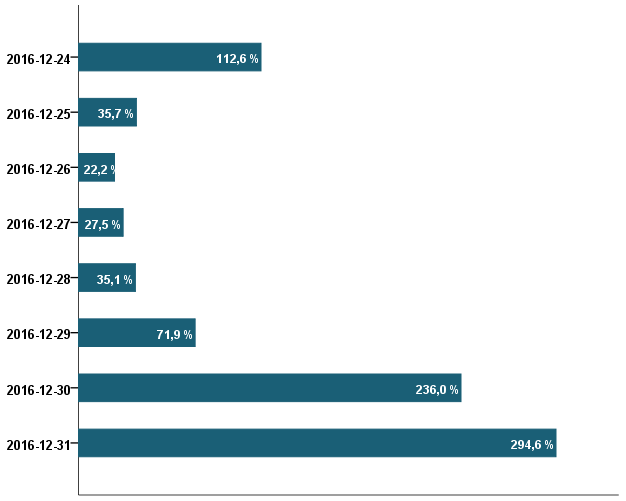 In the holiday season 2016 in Krakow, according to measurements from the station at Bujaka Street, the permissible standard was exceeded 3 times: on 24, 30 (more than twice) and 31 December (almost three times). We have more information, but now we are not showing the original values of the concentrations. We are also omitting the other exceeded thresholds.

Time for the bullet graph. This time, on one chart we show all the relevant information.